Strona Główna » Panele Dotykowe, Klawiatury Dotykowe, Tablety » Pilot RTI SURFiR – do smartfonów i tabletów
Drukuj
For Apple” enthusiasts, RTIs SURFiR is a low-cost companion remote designed for use with an iPad”, iPod touch”, or iPhone” running the RTiPanel app, with support for Android” and similar devices in the future. Providing an affordable alternative to dedicated touchpanel controllers, the SURFiR allows users to incorporate the touchscreen devices that they already own as the main graphical interface for their control system, while adding the convenience of tactile control with hard buttons, and eliminating the numerous screen swipes needed for control tasks that require frequent interaction, such as watching TV. In addition, the SURFiR conveniently keeps track of the device that is being controlled by the smartphone or tablet. A stylish handheld remote with a contemporary look and feel, the SURFiR can be used with any of RTIs powerful XP control processors.

Designed to enhance the experience of using an iPad”, iPod touch”, or iPhone” for system control, the SURFiR companion remote represents a revolutionary new concept for control. With this cost-effective approach, consumers can add the many conveniences of using a dedicated touchpanel controller – such as hard buttons for tactile control and instant connectivity – while still using the touchscreen devices they own as the main graphical interface. As the user changes the electronics under control by the RTiPanel app, the SURFiR follows, ensuring instant access to the device that is being used. Now the user can utilize their tablet or smartphone for all the things they want to do, such as browsing Facebook”, reading, playing games, etc. The result is all the elements of a high-end control system in a low-cost package. In addition, the SURFiR adds a touch of style to any setting with a contemporary look and feel that perfectly complements the sleek design of Apple” products. 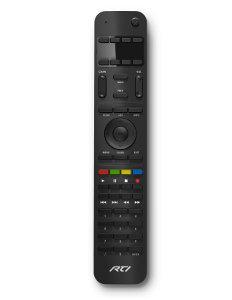